A few days ago, the tv was left on after a show that we usually watch, and the news came on. They were going through the headlines as I got busy making supper. I had to pause for a moment to take in the fucking hypocrisy in the Assbama words they referred to. Like anything that comes out of his pie whole, Total Bullshit!! And these people say it like it means something...


"President Obama believes
there has to be accountability"
Really? Just because HE says so?
HE believes?
The "President" wouldn't LIE, would he?
The Blind Faith they have for this man, unfucking believable :( 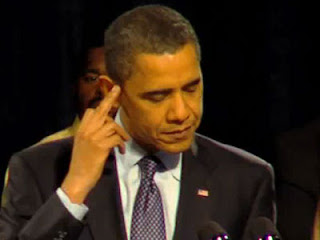 Saw this article on my blog feed earlier. It caught my attention... fits perfectly here.
Posted part of it, the rest is linked below.

.....As Obama continues to insist he has the authority on his own as president to launch a military strike on Syria, we should remind the White House that Senator Obama demands President Obama be impeached.
On Dec. 20, 2007, then Senator Barack Obama, asked by the Boston Globewhether president George W. Bush had the constitutional authority to bomb Iran without specific authorization from Congress, Obama answered: The President does not have power under the Constitution to unilaterally authorize a military attack in a situation that does not involve stopping an actual or imminent threat to the nation.
As Commander-in-Chief, the President does have a duty to protect and defend the United States. In instances of self-defense, the President would be within his constitutional authority to act before advising Congress or seeking its consent. History has shown us time and again, however, that military action is most successful when it is authorized and supported by the Legislative branch. It is always preferable to have the informed consent of Congress prior to any military action. Obama went on to specify he had then introduced Senate Joint Resolution 23, stating in part that, “any offensive military action taken by the United States against Iran must be explicitly authorized by Congress.”
In other words, unless President Obama can show that the Assad regime did authorize a chemical attack and that Assad’s use of chemical weapons represented a direct threat to the defense of the United States, then former Senator Obama would have been willing to support an impeachment resolution in the House.
As long as Barack H. Obama is allowed to remain in the White House, the Constitution is no longer safe.
Article Source 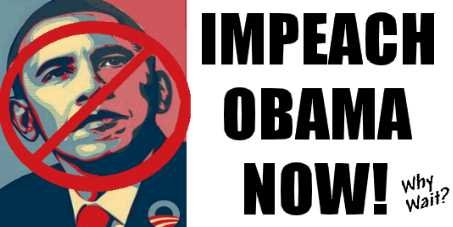 Obama began to disregard the constitution almost immediately upon his election.
And he continues to 'make it up as he goes along',and all the ass-kissing progressives smile and go along.I only hope people will open their eyes and vote for real conservatives for the next couple elections,and maybe we can undo some of the damage he's done.

It is not just Obama ,It is ALL of them. They ALL disregard the constitution because that is what there masters tell them to do. Make no mistake; The men in the White House and Congress are not the men who rule, They are servants to the men who rule, and if they disobey have no more value to the rulers than we do. ---Ray

They don't even realize they're doing it.

My liberal roommate: "I believe that the Liberals are making more financially sound decisions. And that is why I voted a second time for the guy who spent more in 6 months than his predecessor did in 16x that time, and rammed through the most expensive and incompetent bill that nobody has ever read fully, even 3 years after it was passed."

"I'm a Mormon, and don't support the gays. But I will argue with you until I'm blue in the face that the government should step in and force churches to hold wedding ceremonies for gays."

"I'm pro-life, but I think it's totally cool to censor the Kermit Gosnell trial, and Fox News are a bunch of idiots."

"I'm pro-gun, but I believe that we need to restrict gun ownership and magazine sizes, and ban the weapons that are almost never used in homicides."

"I'm religious and a moderate, but I hang on to every word that comes from the mouth of Bill Maher's mouth. Yes, the same Bill Maher who is among the most extreme Liberal voices in the nation, and who openly condemns anybody who is not a militant Atheist."

He doesn't even realize he does it. I pointed it out to him once, and he said, accusationally, "I'm so glad you know more about my political beliefs than I do."

I responded with something I have NEVER said before to ANYBODY.

He wants to think that he's a free-thinker, but what I see of him, both politically, and religiously, is that he requires a leader he can attach himself to and follow blindly anywhere that leader will go.

Yes Volfram and He like so many others will scream SIEG HIEL! with true joy while "obeying orders" ,No matter how evil or vile those orders are. You see he need a god king to give his pathetic life meaning , structure ,and hope. He can NEVER think about who he is, to do so is a kind of suicide. It would force him to acknowledge truth, and end forever the childish fantasy he sees the world through---Ray

You're totally right, Ray. I've been trying to figure out why he so desperately needs somebody to sycophant on for months now, and while I have a theory or two... they can't really be fixed.

I don't like the phrase "Wake up, Sheeple," or "Open your eyes." His eyes are wide-open, he's already wide-awake, and he would rather force me to be livestock than make his own decisions.