Something To Think About...

In 513 Days Between Trayvon Dying and the Zimmerman Trial Verdict, 11,106 Blacks Have Been Murdered by OTHER BLACKS

To be exact, the shameful truth is that 93% of African-American murders are committed by other African-Americans. That is breathtakingly awful when you consider......how incensed the African-American community is about the Trayvon tragedy, no matter what you believe about Zimmerman’s guilt. 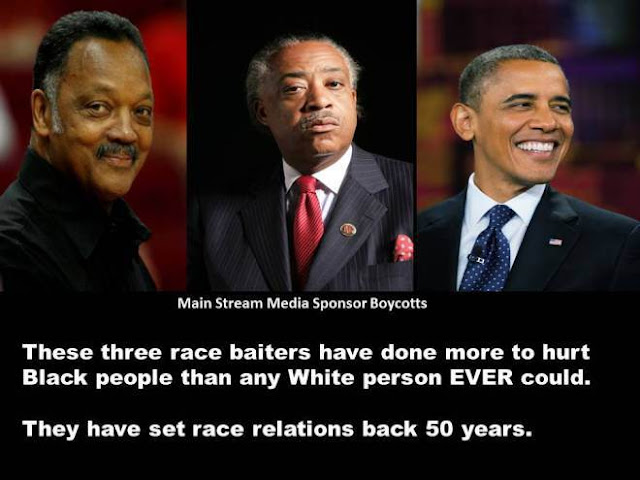 Let’s do the gruesome math, not out of morbidity, but because it manifests the incredible self-centered insanity of people like Jesse Jackson and Al Sharpton.

93% of them by other African-Americans.

That’s 21.65 murdered each day by other African-Americans.

And these racebaiting culture-hustling microphone-pimps only get riled up when a “White Hispanic” kills an African-American? It’s absolutely shameful.

I've been saying that about Bathhouse Barry ever since he started our trip to Hell.

Well the 150 year old experiment in race integration is the worst failure in the history of man. This because the African cannot learn to live above the level of stone age tribesmen ( If think I'm a "RACEIST" then look at Africa) The sad fact is that no government, in all history, run by Africans, Has ever been anything but a savagely murderous slave state with a would be "god king". When left to themselves without "white devils" to control the violence they will form small tribes and begin killing the other small African tribes until only one tribe remains. At that point "the biggest dog" takes over and becomes the "god king" of that tribe. This pattern has never changed in the 500 years since contact with the first Europens. Not once- Not ever- Not Anywhere. For the last 60 years America has tried in vain to change that-to the point of destroying our society and civilization. We in the "west" have become so fixated on "integration" that we have declared anyone that questions "integration", "racist" "reactionary" "ignorant hillbillys" "rednecks" "crackers" "and hundreds of other labels used to "shut up" any effort to restore "white government" .I do not care in any way how the Africans treat each other . But the last 60 years have taught us that "integration" CANNOT work. The Africans will continue to kill each other-and us- at will, and nothing we can ever do will change that.---Ray

Funny, those are the guys who encouraged Trayvon Martin's family to pursue a court case against George Zimmerman.

@ Anonymous -- Sorry, bud, I don't see it that way at all. Some of my best friends are black Americans. I use 'black' to differentiate between my 'red,' 'yellow,' 'white' and 'polka dot' American friends. The only thing I hate is the hyphenated American part that everyone uses. I'm of Scotch-Irish-English descent but I'm not a Scotch-Irish-English-white-AMERICAN. I am an AMERICAN.

That said, there's a helluva lot of black persons I'd rather be with than a whole lot of white trash I've had to put up with.

We were doing pretty well in our race relations until Bathhouse Barry, his handler and toadies came along. I estimate that they've managed (in less than four years) to set us back, at the minimum, 60 years.

I've seen plenty of governments composed largely or exclusively of dark-skinned individuals which were quite functional.

Problem being I can't remember which ones they were because I didn't find the color of the politicians' skin to be noteworthy.

I don't doubt that "Ray" believes every word he's written. What I doubt he's noticed is that it's word-for-word what I've heard spewed ABOUT Republicans FROM Democrats, and is not true of a single Republican I know. I suspect "Ray" is trying to stir up dissent in the ranks of the Right by spewing the lies he's been taught by the Left.

Sorry guys but you are both full of government programed shit. I didn't say "Dark Skinned" I said AFRICAN . Ether one of you is welcome to find me ONE African dominated government That (a) Isn't utterly corrupt (b) is in the least competent and (c) isn't blood chillingly violent to its own people. Then I dare BOTH of you to find me ONE African community with (a) crime as low as the surrounding "white" community's and (b) a black city town or STREET where their has been no rape robbery or armed violence in the last year. And FYI I hate democrats and republicans with great loathing. I believe that everything both "sides" say is nothing more than propaganda meant to baffle the ignorant and dazzle the stupid, while keeping "them" in power. And Volfram I'm not trying to Stir Up anything at all.I'm saying what I believe to be truth. But Hey go down to East St Louis ,or Watts, Or the West End of Louisville Ky. or Camden NJ or any part of Chicago tonight. IF YOU LIVE I'll bet your COOM-BY YAH bullshit stops in a big hurry. Its real easy to say "Oh your a racist" sitting safe in your all white- all middle class suburb. Lets hear what you say standing on the corner of any street in any 'hood in America at 3AM. Better still go LIVE in Newark NJ(Or Mombassa or Jo'Burg or Freetown or Kegallie or Port O Prince) for six months(I don't think ether of you would last three days)

@Anonymous: I give you the multi-decade presidency of Nelson Mandela, of South Africa. To this day, by the majority of the world - from citizens like us to world leaders - he is considered one of the greatest most influential leaders of a country in history. I must also add that, ESPECIALLY in Africa, a very vast majority of any violence towards any white population is because of CENTURIES of whites being oppressive and violent. Asia, Africa, South and North America....any populated continent. So please, take less time to spew slander and uneducated crap about things you don't understand ad instead take some time to read a book. Or watch the History Channel. I'll take my time to respond to the rest of your comments when I feel like it'll be a pleasant debate.