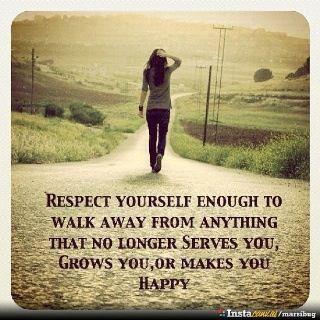 Email ThisBlogThis!Share to TwitterShare to FacebookShare to Pinterest
Click Labels to see More Posts: To ponder..., Words to Live By

Amen.
There's no reward in being bored.

Sorry to disagree, but that is how we got a 50% divorce rate, 30% of births to single mothers for whites and 80% for blacks, the deadbeat dad epidemic, more people receiving benefits than working, and 20% of the population over 12 using illegal drugs. You grow through overcoming adversity, not by running away from it. Although walking away is sometimes necessary, it is normally nothing more than a confession of failure.

This has specific meaning for me. I was not thinking about the generality of it, so I will agree with you on that count.

I was thinking more along the lines of going beyond a self limiting mind set, letting the past go and moving forward, instead of holding on to hopes that were real, but apparently misplaced... it's about taking some of the weight off, and focusing on the worthwhile parts of one's life. And loving yourself enough to believe that you do deserve happiness, and that it is worth fighting for. It's actually about NOT giving up, and being able to tell what is worth not giving up and fighting for...

...and although the road may be long, it's the direction I choose, and the only way to get there, is one step at a time...

Adam,Adam,Adam...
We've got high divorce rates because people get married too young ,before they know who they are;we've got single parents because of casual unprotected sex,and people get paid for not working because they can(Jefferson said something about keeping the Republic until the people discover that they can vote themselves largess from the Treasury).All of these are socialist political tenets,and have nothing to do with the progress of the individual human spirit;we're not talking here about walking away-as in giving up and going home-we're talking about striving to be all that you can be,climbing up,one rung at a time,even if it means leaving behind a part of your life that was comfortable,to succeed on a higher level.Thoreau said"most men lead lives of quiet desperation",and he wasn't just explaining their dire circumstances to them,he was trying to get them off their asses and accomplish something.(Even if it was just to live apart from society to prove that they could do it,like he himself did.)
I'm afraid if everyone stayed in stagnant lives like you suggest,we'd all have civil service jobs,watch TV,and die before we retire.

It reminds me of a quote I heard one time: "If you love something, set it free. If it doesn't come back to you, track it down and kill it."

My life's creed: "If you are doing something, and you don't want to, you had better have a really good reason for it." My quality of life skyrocketed when I adopted and began applying it.

This circumvents the problems Adam illustrated, as there is, usually, a good reason to remain married to someone even if you're not thrilled about it.