This was "suppose to be" a Good Morning, but if you've read my "Coming Clean" post, you know that circumstances, for lack of a better word, make it a little difficult at times, for me to post over the week end.

I saw this picture, and it took me away... 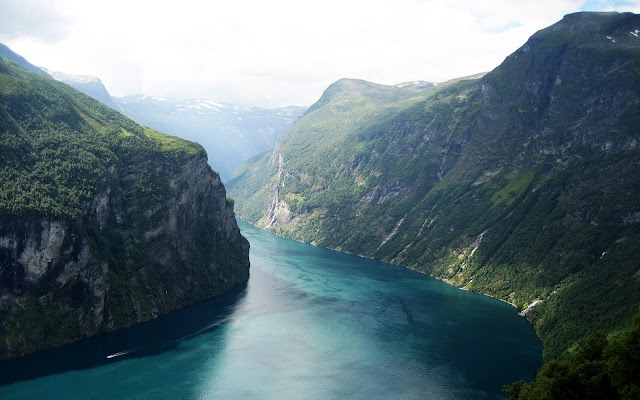 Flying through this valley would be a dream,
I can see it in my mind...

A little Story :-)
My Dad was a pilot, not for work but for pleasure. In his younger days, he flew all over Canada and the USA. He would go on fishing trips up north, and take aerial photographs of towns and bridges he flew over. He would even do stunts in one of his smaller planes. I wish I would have been around during those days. I have pictures and stories but very few experiences. He got married at the age of 50. I was born when he was about 54. And sadly, he passed away when I was just 17. My biggest regret is that I didn't really get to know him. I was too young and immature to realize how these moments would be so precious to me now.

He still flew when I was young, but only took me up one time, when I was about 15. I remember every second of it,
the feelings, the sounds, the smells. I remember noticing that I wasn't scared to be up so high. Actually, that kinda took me by surprise, since I was very nervous before the take off. At the time, he stored his plane at a friends house, another plane enthusiast, who had a private runway in his backyard. It headed out into the potato fields, basically blending into the scenery with a row of tall grass in the middle. The surface was quite narrow, uneven and dropped down at least a foot on either side towards the end.  The little Cessna was warming up at the time, and I was taking everything in.

Then he let me know that it was time, and we climbed in... I still remember the smell of old leather and oil, a smell that was familiar to me since I had sat in the plane many times as a child. The engine got much louder as he proceeded to head towards the runway. I really liked the feeling of the tail lifting as it pulls ahead. And when he turned the plane on the ground with a swing, and it bounced off the uneven pavement of the first section of the runway. I was excited, and nervous. The rest seemed like just a second as he sped up to take off speed, and reached the end of the runway. Which at the time felt like a close call, especially since the plane went slightly sideways as he lifted off the ground. But looking back, I think he planned it that way. He was very good at taking off and landing in short distances. He liked to control the plane and maneuver in tight corners. Like flying under bridges as they do in movies. I've seen it many times in my mind, but never in real life. I wish I had, but that was mostly in his younger days.

So back to the take off. My heart sunk as I watched everything shrink in a matter of seconds. I don't think I blinked once after that. I remember how much of a rush it was to be up in this little Cessna plane that was barely big enough for two, feeling it shake and vibrate from the engine and the wind. Realizing how thin the doors were, that we were basically sitting in the middle of the sky. And that feeling of freedom took over me, limitless freedom... we were flying. It felt like time was frozen, and I didn't want it to end. Moving slowly over a miniature world below.

I close my eyes and I can see all the tiny little houses and cars. The school buses, and the cows made me laugh. The piles of rocks in the fields, scattered about, in relation to how they looked from the ground, fascinated me. I saw all the familiar back roads and trails we use to drive on with the 4 wheeler. And how awesome it look from overhead, so high that you could see for miles. To this day, my mind still goes in areal mode when I look at a map, I like that feeling. How small everything was. Like it was miniature versions of the real things. Almost like I could open the door and touch them. That feeling was very surreal to me. Then he let the plane drop a little and he turned at an angle, feeling the g's in a way I had never felt before, as my side view was now focused towards the ground below, every thing changing direction giving us another amazing view as the plane evened out once more with the horizon.

Then we flew over the house. By car, it takes about half an hour to get to the private airport. And it only had been a few minutes. I smiled as I saw our home from above. We kept flying for a little while, but I knew we were heading back. Not too long after, we were on the runway, safe and sound. The whole thing lasted just about 20 minutes.

All those moments are tattooed in my mind. I never thought about bringing a camera. Honestly I'm glad, because I may not have been in the moment as much as I was. I am sad that I don't have pictures to share, why I try to paint the pictures in words as much as I could. My Dad and I, we didn't talk much, but I loved to watch him work, and I learned so much from him. Those are the moments I remember the most....
-MissK
Posted by MissK at 11:45 PM

which side you live on:)

Your recollection of your father remind me of my flying dreams...

Oh and aren't Dad's great. Whatever one remembers of them seem always glorious... ;-)

That's beautiful, MissK. What a wonderful memory to have.

Yes I often worry about how the Munchkin will fair when I die. I know she'll be young when I go, as I'v had cancer twice and have maxed out any effective treatment option.(I'm in remition , but who knows?) I just try to be the best Dad I can be and hope that enough.---Ray

Great story,thanks for letting us into your past a little.
I have a feeling there's a lot of your Dad in you,with the kind of attitude you have and the life you lead.
Who knows? he may be watching you still.

Neither Stevie, that's in Europe. I just wanna fly it ;-)

Only when I was young James, but I still remember them. Btw, I didn't forget your "post", just letting you know... ;-)

Thank you Heisenbug, lots of emotions writing that out :-)

Ray, from what you've shared with me here, it's clear that you make time for her. That's priceless, and she will cherish those moments. You are a good Dad, because you care about what's important to her, and making her happy. It's not about the stuff, it's about the time. And I hope you have many many more years to share with your loved ones.

You don't have to answer this, but I'm curious about your age, since Dad and I were so many years apart. I know your Munchkin is very young :-)

You're welcome Billf :-)
I like to think that I do. I know I have his patience and persistence. He liked to work on his own, I'm kinda like that too. And he never craved to be part of the crowd, being you're own person was a very good thing. Thanks Billf, you reminded me of some really cool things. And yes, I do feel he's watching over me. I look to him for answers sometimes... and I feel his presence and guidance still....

No pictures needed MissK, you painted a beautiful picture with your words. I have flown many times, in many places, big planes and small, and you have captured the sheer joy of being in the air very, very well. Your Dad would be very proud.

Hope you get the chance to get back up there soon!

And he remembers the date... :-)
Seems to me, your huge surprise turned out to be a priceless blessing. I'm happy for you Ray :-)

That you would say that Sarge, someone with a flight log that would rival my Dads, really means a lot. Thank you so much :-)

I did have the chance to go up one more time after that, just a few years ago in a helicopter, with my daughter. Loved it! That's a story for another time ;-)

Hey there.
I am pilot myself, and I bring my father up there :).
Nothing in the world is equal to that feeling... airborne!

And I can tell Im surely looking forward to take my daughter with me some day. I plan to have 3 of them :).