Being slave to the calculator is one thing,
but to a GPS? Fuck that shit!! 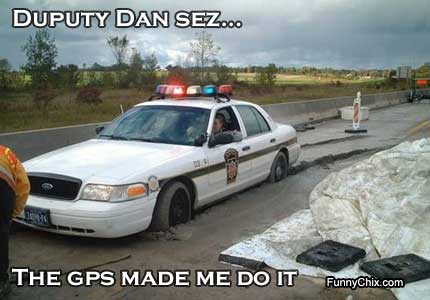 At my old job, I would travel all over the province to locate people I had never met. Many lived way out into the country and off back roads. Some of these roads I had never traveled on prior. Uncharted territory was my game. The only houses I had a hard time finding were the ones who gave me wrong addresses. A lot of people would say: "you must have a GPS?" It was funny, their jaws would drop when I would tell them no, don't need one if you know how to read a map, and use common sense of course.... unlike giving the damn GPS the last word.... seriously??

I might have a different opinion traveling in a big city for the first time, but I would have a hard time trusting the thing, that's for sure. I'm thinking it would be a lot more fun to "confuse" it then to "obey" it... ;-)
-MissK

I prefer maps myself.

You otta see my topo map collection of my home state.

And when I travel, I always have a monster road atlas.

never have used gps
maps are ok
i like to rough it, like to be adventurous, to see where that way goes
:-)

I had a guy spend 4 hours to get to where i was today - a half hr away! You guessed it - gps!
I gave the moron specific, perfect, and simple directions to get to me, but he was unable to use his brain because he always uses gps! Stunning, and i'm not exagerating on the time he blew!
I used it twice: las vegas to bakersfield and monterey to oakland. Both times it screwed me over. That was it, and never again!

Love the pic. Being a Pennsyltuckian myself, I always enjoy seeing the PSP at their finest.