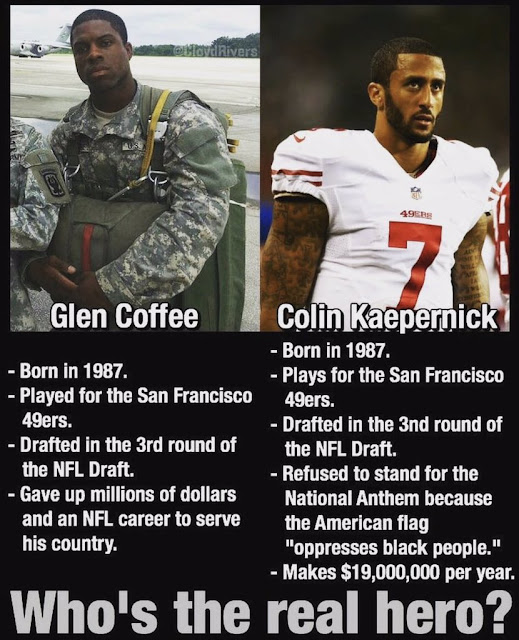 Respect for Family, Friends, Faith, and Community/Country. For those who have it, they need nothing else to sustain them. For those who don't, they must prop themselves up with foolishness and material things.
Did my time in the Marine Corps. Watched that flag draped over the earthly remains of those who fought, and died, to protect that spoiled brat's right to do stupid shit like that. I'm probly half his size, but I believe the strength of my convictions, not to mention my anger at his insolence....aw fuck! I jus' wanna crush his manhood, poke his fuckin' eyes out, and ask, "so, whatdaya got left to live for now, bitch?
Sorry, I seem to have misplaced my political correctness today.

Sorry for the rant...ish. I proly shudda focused on the question at hand...Mr. Coffee. I would get between a bullet and that Righteous Man, if I could. That fella's Mother can go to church or wherever, with her head held high and proud! Gotta wonder how the traitor's ma feels about now.
Sumpin' proper service represents is an undeniable mutual cause and the complete righteousness thereof...Liberty, Freedom, And The Pursuit of Happiness. And if necessary, I would willingly give my life in defense of that, and in support and defense of those at home, and those who believe as I do and are willing to take up arms, and "Walk Through The Valley".
Sure, ya gotta use your own judgement in the particulars sometimes, and don’t blindly follow orders, cuz you ain’t there to serve your government. You’re there to defend your people and your people’s way of life.
When I was in service, if a course of action was in question, I allus asked myself, "how would my Mother expect me to deal with this?" The resulting answer never failed to direct me to the right course of action, but then I was blessed with a very good and wise Mother.
No, I wasn't a mamma's boy. She seemed quite content to see her wildest child (#6 outa 8) get the hell out on his own at 17, proly cuz she knew she'd done her best to impart good morals and values, and the rest was up to me. In most respects, I like to think I did not disappoint, though there were some indiscretions in some of them foreign lands...