Are You Fucking Kidding Me??

"Taking Liberal Indoctrination to a Whole Other Level" 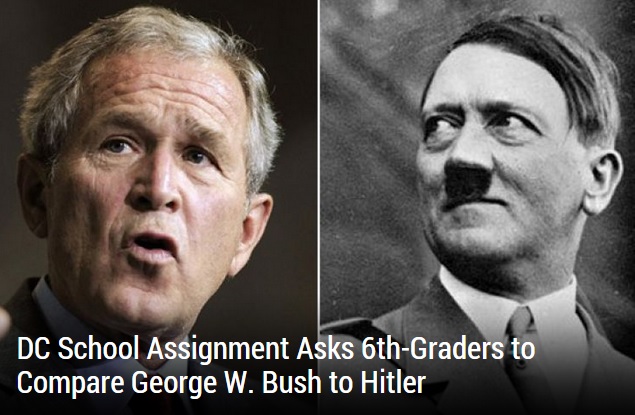 Source, Article and Picture of the "Homework" below

September 11, 2014 9:12 am
(BizPacReview) – Taking liberal indoctrination to a whole other level, a District of Columbia public school gave sixth-grade students a homework assignment asking them to compare former President George W. Bush and Adolf Hitler.
The offensive assignment was issued at McKinley Tech Middle School, according to The Washington Times.
Incredibly, the text places the Iraq War on similar footing as the Holocaust, and described Bush and Hitler as “two men of power who abused their power.”
The Times reported that the text on the assignment read:

“Now that we have read about two men of power who abused their power in various ways, we will compare and contrast them and their actions. Please refer to your texts, ‘Fighting Hitler — A Holocaust Story’ and ‘Bush: Iraq War Justified Despite No WMD’ to compare and contrast former President George W. Bush and Hitler. We will use this in class tomorrow for an activity!”

“I think trying to compare Adolf Hitler to an America president is just not right,” a parent who asked not to be named told the Times. “I didn’t agree with Mr. Bush or his policies, but that was over the line.”
After complaining to the school, the parent said they were told the assignment was part of a curriculum unit approved by the school system.
According to a D.C. Public Schools spokeswoman, it was all just a big “mistake.”
Spokeswoman Melissa Salmanowitz told the Times that a teacher combined two readings that were not meant to be compared as assigned.
“The teacher deeply regrets this mistake, and any suggestion to malign the presidency or make any comparison in this egregious way,” Salmanowitz said.
An image of the assignment was posted on social media: 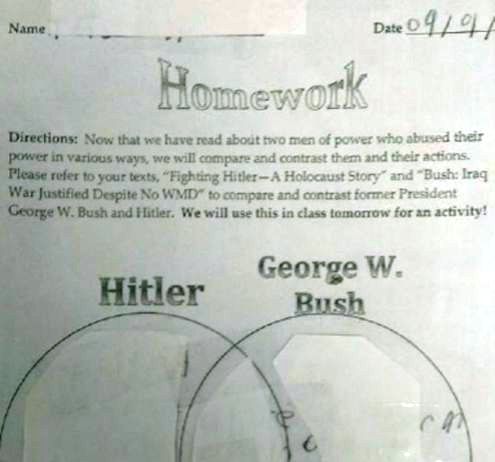 I did this story yesterday and I'm still pissed. And we're suppose to comprimise with people like this?